As I’m sure anyone who reads this blog knows, I’m in the midst of a 10 week (annual!) poetry course being held at the UPenn on Modern and Contemporary American Poetry.  One of the many things I like about the course is how different it is each year.  This year is particularly fresh, with a lot of material I haven’t come across before, including, to my delight, the work of Joseph Massey, whose book Illocality is on its way to me now from the US.  The poem that really got to me was "Polar Low”, and rather than try to summarise it, I’ve put the text of my essay on this poem below, not only because it covers what I want to say about the sparse complexity of this poem, but also because it provides an example of a close reading of a poem - the sort of thing I tend to do when reviewing a book (and why I’m continually drawn to reviewing, and the way it forces me to take time).

I've found a full text version of of this lovely poem here: http://robmclennan.blogspot.com.au/2015/10/joseph-massey-illocality.html.  More on Joe Massey can be found at his website.


The nothing that is: approaching nirvana in Joseph Massey’s "Polar Low”

There’s a precision in Joseph Massey’s “Polar Low,” that owes much to the Imagist tradition.  For one thing, Massey’s “direct treatment” of the trailer is described with stark clarity. The poem could be a painting, with its single image of a “yellow double-wide trailer”.  There is “nothing else”, aside from setting: the winter sun, the snow, and the sparse vegetation. The singularity of this observation and the absence of an ‘observing self’ is pure Imagism. The contrast of the colours between the yellow trailer and the white snow becomes luxurious in such a desolate scene, calling to mind William Carlos Williams’ “The Red Wheelbarrow”.  However, there is much in this work that takes it outside of the Imagist tradition.

The colours themselves are more than what they seem. The yellow of the trailer mirrors the yellow of the winter sun, which has been anthropomorphised into amnesia, while the morning becomes inarticulate.  Suddenly the reader becomes conscious of a human presence, whose suffering (coldness/poverty), and inarticulate amnesia is suffused into the scene by reversal of the pathetic fallacy, as if the human were transforming into the sun and morning rather than the other way around.  The white of the ice sheathing the trailer mirrors, both literally in terms of the light being reflected, and metaphorically in terms of matching, the white of the snow and the implied white of emptiness (the dimming scene as the piece progresses), and perhaps the white of an unwritten page. These “variations” also contrast with the green/brown of the winter thicket, a dying remnant of spring.

Rhythm is created by repetition of sound and structure, with short couplets that don’t necessarily couple up.  The first stanza has two hyphenated constructions, which are semantically opposite—half-sheathed versus double-wide—as well as being metrically and syllabically reversed.  The word “mirrors” also becomes a connector linking the trailer with the much more abstract morning – disparate images equated.  Massey uses punctuation between stanzas to slow the reading down and force a pause for reflection at each full stop.  We stop after morning as almost a shudder in our movement across the scene, and then again after sun, so that the two phrases, “The inarticulate morning” and “The amnesiac sun” are paralleled rhythmically and semantically, creating a breathlike quality to the reading.

The next sentence begins with the conjunction “And”, the point at which the poem begins to move, the trailer receding. The repetition of sound becomes stronger here, taking on a more regular rhythm that doesn’t pause until we reach (the) “perimeter”, creating a meditative effect.  This is further heightened by the soft rhymes of thin, dim, perim-eter.  Alliteration throughout the poem also adds to the deepening of breath, with the m sound in “mirrors", “morning", “amnesiac"; the s sound in “else", “contrast", “these"; the k sound in “thicket" and “choked"; the o sound in “other" and “over"; and the n sound in “noun” and “frozen".  These sonic connections give the poem a deep unity that not only creates motion in the stillness of the scene, but also draws the reader into the inarticulateness - a meaning beyond semantics, as if all we could see is white and all we can hear is our own heartbeat. At this point, the entire poem transforms the present moment itself, rather than the trailer, into its subject, and the dissolving of those names (or “nouns”) into a kind of mindful emptiness or the realisation of non-self, and both the reader and writer’s union with the scene, as the denouement.
Posted by Magdalena Ball at 5:22 PM 0 comments 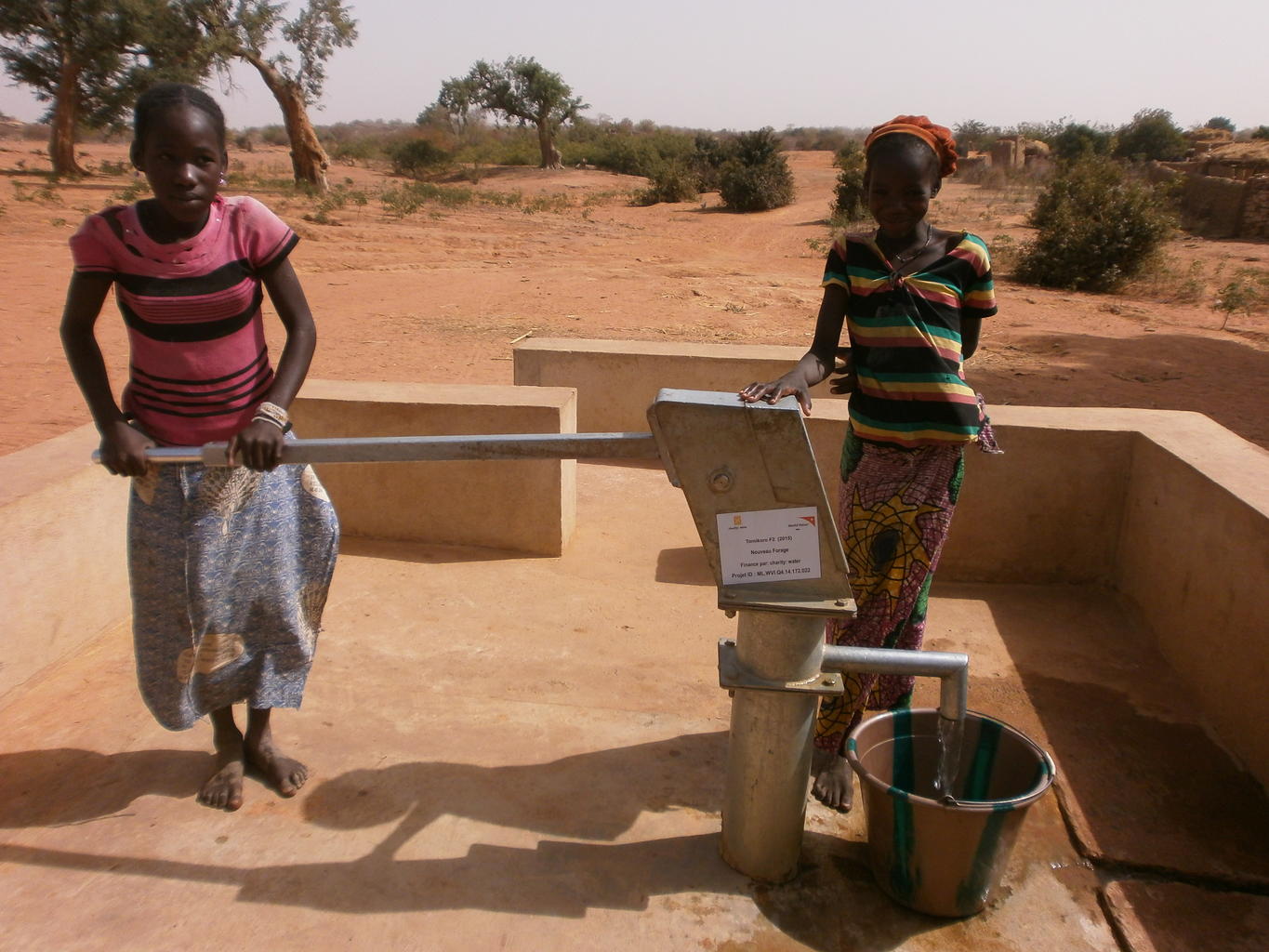 It has been two years since my Charity:Water 50th Birthday campaign and I’m very happy to report that the project is now completed.  Together, we raised $1,670 to help drill a well so a community of 360 people in a village in The Republic of Mali, West Africa, could have access to clean water (something I have plenty of and tend to take for granted).  Every penny of what we raised went to this project (no admin fees!), the total cost of which was just under $14,000 (lots of other generous donors got involved some matching what people raised).  I couldn’t have asked for a better birthday present, and the value of this gift continues to provide value throughout the community, especially the women and children who used to have to walk up to two hours to collect water, which often wasn’t safe and made people sick.  It’s very gratifying to see a project through to its completion and to see how many people came together to make this project a success.  If you’d like to see more specifically how you helped, who else got involved, and where the project is located on a map, you can visit the project page here:  Tomikoro F2 Community Water Project.  Thanks so much to all of you and if you decide to do some similar kind of fundraising project, do please feel free to hit me up.

Email ThisBlogThis!Share to TwitterShare to FacebookShare to Pinterest
Labels: @charity:water

I have no idea who decides on days-of-the-week things like Throwback Thurs
or Poetry Sunday.  I had just assumed it was some kind of alliterative thing, though there’s no real alliteration in Poetry Sunday.  Operating across geographical boundaries does means you can kind of double up - celebrate your birth twice without growing older, have a Poetry Sunday on Monday, and basically break any semantical rule you want on the grounds that they do it differently somewhere else.  If any day of the week is in need of a poetry injection, it’s Monday which is often sadly devoid of poetry.  So herewith is Poetry Sunday which I’ll continue to do on my Monday but which is most definitely Sunday somewhere else in the world (North America for example).

I've been immersed in Gertrude Stein’s Tender Buttons for ModPo, and have been loving it as always, but reading Stein is never relaxing for me.  I always have to work with it.  It’s tiring.  Michele Seminara’s Engraft is beautifully written poetry, smart, elegant and in many ways post-modern, conceptualist and rich, but it’s not hard work.  The poems are immediately familiar to me in terms of their landscapes, and the domestic sensibility of their concerns: love, loss, aging, death, illness, motherhood, and literary intertextuality all presented lightly, and sometimes with humour, even at its darkest.  I have only read through the book once, and usually read through several times before writing a full review, but by way of a taster, here’s a snippet of one of the poems that hit me immediately:


How is it that we came to be locked
in these bodies, lives ossifying
not rights of fat, rigidity and suffering?That man was once a boy
light as a dandelion, the body
barely given thought.

Now it’s a trap, and death the escape.
The doctor says my oestrogen is low.
She prescribes hormone to alter
the cruelty of my vision. (“Zhuang Zhou Dreams in Pink”)

Full review will follow at Compulsive Reader soon, but if you can’t wait, the book can be purchased in both hard copy and ebook form at Michele Seminara’s blog here: https://micheleseminara.wordpress.com
or from the publisher here: http://islandpress.tripod.com/ISLAND.htm or at Michele Seminara’s blog:
Posted by Magdalena Ball at 8:35 PM 0 comments

Compulsive Reader newsletter for Oct is out

Compulsive Reader Newsletter has gone out and is making its way to your inboxes at this very moment.  As September was a busy month for literary awards, this newsletter has rather a lot of global literary news including the First Novel prize, the Toronto Book Awards, Academy of American Poets, Wallace Stevens award, The Man Booker Prize for Fiction and a whole lot more.

There are also ten new reviews being featured including, Thug Kitchen, Charlotte Wood’s The Natural Way of Things, How to Be a Writer by John Birmingham, Undying by Michel Faber, interviews with Madison Windsong and Shannon Baker, and many others.  There is also a giveaway for a copy of Behind Closed Doors by B.A. Paris.  If you can’t wait for the newsletter to arrive, or if it ended up in spam, you can grab a copy here: Compulsive Reader Archive