In case you’re one of the few people who haven’t heard me gushing about The University of Pennsylvania’s Coursera based Modern and Contemporary Poetry (“ModPo”) course, let me start by saying that this is the best literature course I’ve ever taken (and believe me, I’ve taken a lot of literature courses including a couple of degrees).  I’ve ‘done’ ModPo like 5 times, and every time has been different and intensely stimulating to me as reader and writer.  I’m excited about doing it again this year.  For those new to the course or to the study of contemporary poetry, you won’t be out of your depth.  The course caters to all levels and those whose struggle with the English language, who have not done much study, who have learning disabilities, or any other reason that might otherwise prevent you from enrolling in a formal course, are all welcomed and encouraged heartily - there are plenty of people and resources to help.  For those who have post-graduate degrees, you won’t be bored or find the course too easy.  There are many academics and teachers participating in ModPo, some of the most erudite and smart thinkers you’ll ever come across, including some of the poets we study (the likes of Christian Bök, Tracie Morris and Charles Bernstein to name a few).  You can participate at whatever level suits you and there are a wide number of spin-off groups to join if you’re so inclined  If you’re busy, you don’t need to read everything, or even do the essays and quizzes. You can just dip in, dabble, and play.  You can also go full hog, read everything and do ModPo Plus, which is like an extra area for those who want new poems, new challenges, and more complex questions and even make your own community videos for upload.  It’s all open, all free, and if you want it to be, totally immersive. 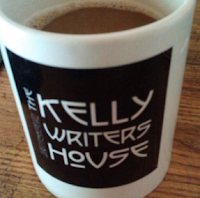 ModPo opened up my perception of what a poem can do (and I thought my perception was already pretty open), and taught me to read “difficult" modern poetry in ways I never thought possible.  I actually became a Steinian.  I found myself really enjoying experimental forms of poetry that I would have rejected before.  I became a better critic, and, I like to think, a better poet.  In addition to all the goodness of ModPo itself, if you go through the course (at whatever level of engagement), you become an “alumni” and are then able to sign up to any number of Kelly Writers House discussion groups that are held throughout the year.  I’ve participated in groups as diverse as Pink Floyd’s The Wall, Elaine Myles, Anne Waldman, and Emily Dickinson (to name a few).  You’re also welcome to visit The Writers House at UPenn in Philadelphia for their many events, or just drop by to use their facilities, drink their coffee and eat their food - all free; all open; all wonderful.  The goodness just goes on and on, and it makes you want to share too.  So I’m sharing.  Go - sign up:  https://www.coursera.org/learn/modpo  It starts on Sept 10th.  You can thank me later (you will...and you wouldn’t be the first).

Compulsive Reader Newsletter for April has gone out

In all the excitement of the Newcastle Writers Festival, I forgot to mention that the April newsletter went out, as usual, on the 1st of the month.  If you didn’t receive it or would like to check the newsletter out before subscribing, you can grab a copy in the newsletter archive.

This issue contains ten brand new reviews including Harper Lee’s Go Set a Watchman, Brigid Delaney’s Wild Things, James Fry’s That Fry Boy, and many more.  We also have the usual extensive roundup of literary news from the month of March, and three fantastic book giveaways.  If you are a subscriber, you’ve probably already read it (unless your spam filter has been upset by the word “compulsive” - it does happen sometimes).  If not, you can subscribe for free at The Compulsive Reader.
Posted by Magdalena Ball at 1:21 AM 0 comments

Newcastle Writers Festival day 2: poetry and the wisdom of crowds 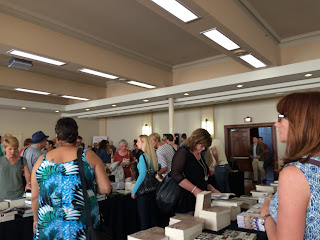 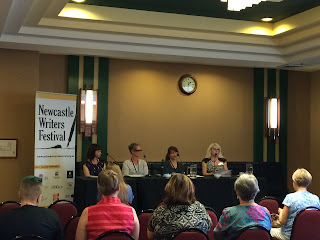 The second day of the NWF16 was a little more laid back for me than the first. I didn’t arrive until midday so had a bit of time to look around the packed and very tasty bookstore set up by Macleans Booksellers.  The weather continued its beautiful streak, even though it was raining back home, and it was nice just to walk around past the cafe setup outside of the Civic theatre and City Hall and feel the buzz of literary excitement as people walked around holding books, talking about books, and generally waving and smiling at one another.  I felt like I knew everyone I saw even if I didn’t know them.  It was that kind of atmosphere.

Then it was time for the Home Grown session where I had the great pleasure of reading poetry with Ivy Ireland and Keri Glastonbury.  Keri’s poetry was fresh and exciting, enriched with current affairs and chance operations from Facebook and other social media influences, and Ivy’s was like my own in ways, blending science, spirituality and skepticism, humour and domesticity.  Jenny Blackford was the perfect host, fielding some pretty heady (and sometimes unanswerable) questions and keeping us all to time. 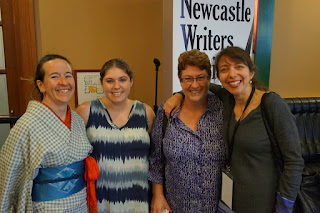 After that I joined Cassandra Page, Jan Dean, Leonie Rogers, Tallulah Cunningham, and Janeen Webb for a reading at the launch of Novascapes Volume 2, a speculative fiction anthology.  As with the Sproutlings launch, I got a strong sense that this was a community of supportive writers who were looking after one another.  For me, that sense of connection and support was the overall theme of the weekend.  Apparently there were 6,500 attendees for over 65 sessions, exploring a very wide range of genres, issues, themes and ideas, but the whole thing felt intimate and inclusive.  Of course I got plenty of inspiration for my own writing and my fingers are itching to get back to it, but it also felt like there was a real sense that this year's festival was about the power of the collective: that the answers to the big questions are all around connecting (in the EM Forster sense):  coming together, supporting one another, and talking/writing openly, even about difficult, painful subjects and seemingly intractable issues. I heard this refrain again and again through nearly every session I attended.  The dates for NWF17 are 7 to 9 April, 2017 and I’ve already got it in my diary.  Huge kudos once again to the amazing volunteers who kept everything running smoothly and to the festival director Rosemarie Milsom, who did a superb job with the program. 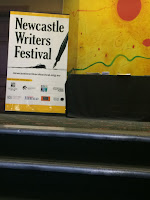 NWF16 is over, and in the post-festival glow, I thought I’d do a quick write-up on my sessions and a few of the key insights they yielded.  First and foremost, the festival as a whole was incredibly slick.  Even when the fire alarm went off and we had to evacuate during my first session, the superb and well-inducted volunteers kept things moving, and got us out and back in with minimal disruption. At every point during the session and without exception, the volunteers were smiling, helpful, and generous with their support. 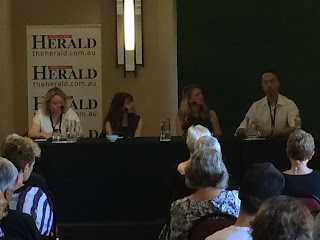 My first session was Playground Politics with James Fry, Rebecca Starford and Brigid Delaney. The panel spoke about bullying as it plays out in James', Rebecca's and Brigid’s books, and I think the biggest takeaway for me was that bullying can have far reaching and extreme consequences that can be difficult to trace back. but talking openly and coming to understand the roots of bullying can be very powerful, not only in terms of individual well-being (that of our children and selves), but of our society as a whole. 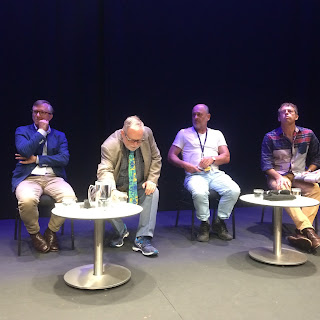 I had a brief break before my next session and was lucky enough to get into the sold out session The Economy vs The Climate with Tim Flannery, Ross Gittins, Dennis Glover, Scott Homes and Paddy Manning.  What struck me about this session was the optimism of the panel even as they made it absolutely clear that urgency was critical and that failing to take action now to reduce emissions would have significant risks to growth and prosperity (e.g. the economy).  The key is in managing the transition before we reach crisis point (though that’s very close).  Flannery in particular provided examples including Sundrop Farms in Queensland. 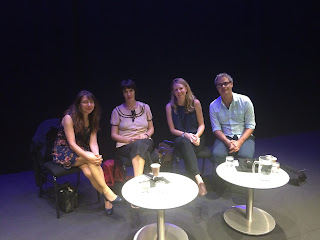 This was followed by my session with Kate Holden, Michael Sala and Rebecca Starford on The Aftermath - what happens when the private becomes public?  I suspect that the heavily engaged crowd for this session contained a number of memoir writers, and the questions asked included litigation, morality, and process, but what really stood out for me was a point that Kate made that while memoir writing does indeed have aftermaths, in many ways it is also a tender and generous act.  By openly examining and then accepting/forgiving ourselves, we provide the means for others to to the same - it’s a way of not only personally, but collectively, healing.


With an hour’s break between my own sessions, I managed to slip into "Mothers and Fathers: Why so complicated" with Rod Jones, Mark MacLean, Rosie Waterline, and Meredith Jaffé before the Sproutlings launch, though I was near the back so didn’t take any photos. There was an intensity to all of their stories but I was certainly not surprised by the ongoing impact, beneath the skin and into the fingers of the writer, of the parental relationship, both as children, as children of children, and as parents in the case of Mark and Rod (Rosie always spoke about her nieces). 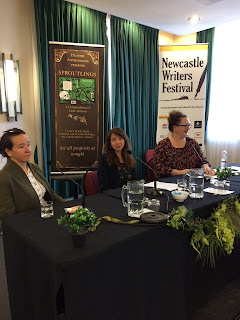 Day one ended with a very enjoyable ‘launch’ for the Sproutlings Anthology with editor Morgan Bell and illustrator Tallulah Cunningham.  As many of the audience members were also authors in the collection (some of whom were dressed as plants!), this turned out to be full of camaraderie, with lots of nodding heads, and some really focused questions in the end.  The discussion focused a lot around process and promotion and my overall takeaway from this was that, while writing may be a solitary process, being part of a broader community (and anthologies are a great tool for that) is vital.  I’ll talk more on that in my day two write-up, as this theme of connection and understanding, for me, was the real takeaway from the festival overall and it came up again and again, in many different genres, structures, and contexts.  That was the end of day one, and I felt quite bloated with delight after that, and ready for a glass of wine and feet up before a slightly more relaxed day two which I’ll cover shortly.
Posted by Magdalena Ball at 6:16 PM 1 comments