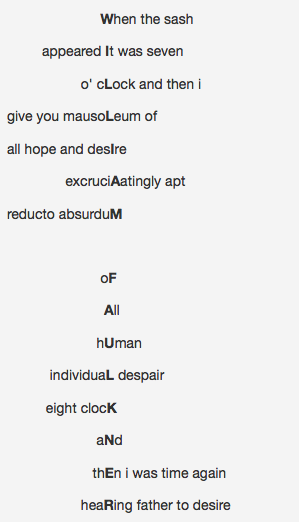 While the Faulkner passage itself ends with death and despair (and the fruitlessness of war), this mecrostic presents a more affirmative outcome in the second stanza as the poem ends with a kind of waking up, perhaps through hearing the continued ticking of the clock (“hearing”) into desire (hearing being "the father of desire").  The repetition of the adverb “then” in the two stanzas gives us a sense of change and connection, also forcing us to focus on the transition between the two passages as important.  In the first stanza time stopped, and we were out of time, and then in the second stanza, we’re reborn into time (“i was time again”), heaRing (perhaps the ticking) re-opening the desire that was lost in the first stanza.  The capitalization of the R in “heaRing” also calls attention to the ring in that word, so it’s almost as if we heard a gong, sounding the bell that woke us into time.  The three single words at the start of the second stanza slow the reading down dramatically. The death or stoppage of time only lasts an hour.  At eight o’clock we come back into time, and by association, life: reborn.
Posted by Magdalena Ball at 7:50 PM