Continuing on from the last Poetry Monday post, I thought I’d post up my second ModPo essay.  Again, this is is the second time I’ve written on this poem, but I haven’t pulled out my old essay (not sure I’ve kept it), and as it has been some years, I have come at this task with beginner’s mind.  I found this essay to be a relatively easy and enjoyable one to write (much easier, for example, than the poetry book review I’m working on - a wonderful but slow and complex read).  The process of writing this has helped me clarify not only the principals of Imagism which we’ve studied, but also allowed me to trace the transition of a poem from good to excellent.  Feel free to add in your own essays, responses and comments.

There has been much written about William Carlos Williams’ “Young Woman at a Window”, and while we know that second version is the one that Williams ultimately published, it is fascinating to trace the condensation from the first poem to the second, and to explore why the second poem not only adheres better to the imagist manifesto, but is also objectively speaking, a more powerful poem. 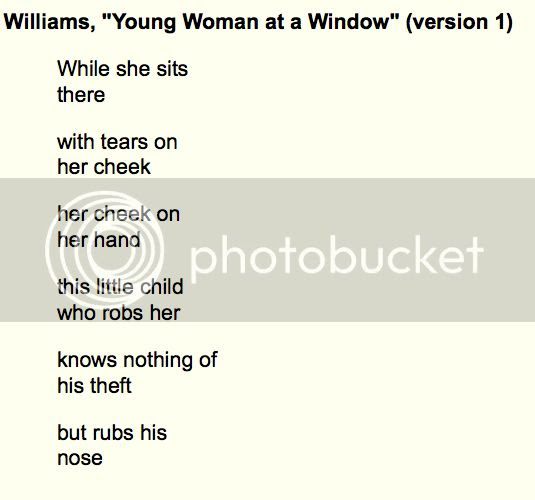 While both of the poems feature the same objects: a woman and a child at a window, and both have similar structures and the same number of stanzas, the second version has been reduced to 23 words from 29, with a more even cadence and couplets, beginning and ending with 3 words.  The first version is more narrative, leading the reader towards a sentimental conclusion.  The second version of the poem allows the reader to make his or her own inferences, leaving the image clear of inference. In version 1, specific words and sentence structures are used to evoke sentiment. The reader is told that the child has “robbed” the woman, and is unaware that he’s done this.  Also the child rubs his nose – an unappealing act linking the woman’s tears to the boy, and something about the demands of parenting.  That the boy needs his nose wiped becomes the denouement for the poem. In addition, the delicate early rhythm of the poem and its first word repetition is marred by words like “this”, “who,” and “knows” which break the cadence with sentence structure type inclusions that further progress a narrative. 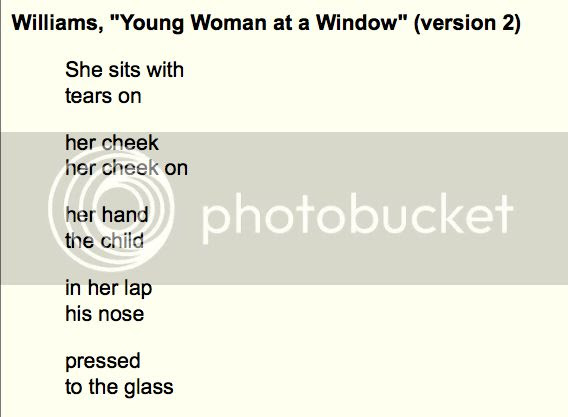 In the second version of the poem, Williams has condensed the image and removed extraneous words or “vague generalities” like ‘robbed’ and ‘knows nothing’, and actions like ‘wiped his nose’.  Instead the image is static—frozen in time like a statue, and is rather more beautiful as a result.  There are no runny noses here or self-pity.  The reader is confronted with, in the words of the imagists, an “exact visual image” which makes its statement completely. The reader is left free to make inferences about the nature of the tears, about the symbolism of the window which hints at inside versus outside without stating it overtly, and about the reason for the two sitting together in such a pose.

Though there is no expression of ‘robbery’, the image is suffused with sadness and longing, but only by virtue of the imagery. Ending the poem on the word “glass” creates a perception of being cloistered, without the need to state it.  Finally, and perhaps most importantly, the second poem not only uses the image itself to convey meaning, but it is structurally and rhythmically aligned, using repetition and alliteration of the words “her” at the start and “on” at the end of the first three stanzas, and the sibilance in “nose”, “pressed”, “glass” which convey both silence and tears.  This poem works perfectly when read out loud, encouraging the reader to just look, to just feel and just participate directly in the subtle longing and sense of cessation conveyed by the poem.
Posted by Magdalena Ball at 4:16 PM