Writing the Tough Stuff (Or Killing the One You Love)

It’s not easy writing a scene where you kill the one you love.

Of course I don’t mean your actual spouse or lover. I mean the wife, husband, or sweetheart of your main character.

I’ve done it in FOR KEEPS. Thinking about it tears my heart out every single time.

That’s what I mean by “writing the tough stuff.” Sam Moore—a retired family doctor who is our resident hero in Moore Mysteries—is very much like me, except he’s twelve years older and retired with enough money to putter around in his gardens all day. Let me repeat that. All day!

I hate him for that.

Okay, so maybe that’s a little extreme, considering he’s fictional. Shall we say, I am exceedingly jealous of his lifestyle? Although Sam was a family doctor and I am an engineer, we’re still a lot alike. We both love to plunge our hands into the soft earth and grow things. We both love our grandkids so much it hurts. And we both have spouses with multiple sclerosis. There are plenty of differences, too. I cook, I write, and I take photos. Sam doesn’t. But of course, it’s not a competition. At least I don’t think so…

In spite of the fact that he’s not real (at least not in the traditional sense, LOL), I relate to this man and feel his pain when he’s hurting. Sure, you say, writers should feel ALL their characters’ pain. We have to, to get into their heads and nail the characterization. Don’t we?

But I’ll bet some characters are closer to your heart than others.

Sam’s wife, Rachel, shares many qualities with my dear wife, Dale. They both endure MS, they both love to read, they are both chair-caning artists. Some of their symptoms are the same, but that’s where they split apart. Rachel loves to cook (that’s my job in our marriage), she’s in a wheelchair, and she stays pretty upbeat, considering her challenges. They both adore their grandchildren and both love to read. Rachel’s a tribute to Dale, in all honesty. But she also has morphed into her “own woman,” too, and I love her deeply. Er... through Sam, of course. (Honey, don’t be jealous!)

In the first two books of the Moore Mysteries series, Rachel sticks by Sam’s side, supports him when he’s overcome with grief and is plagued by strange paranormal events, and loves him deeply enough to keep him sane.

That’s why it really hurt when I had to kill her.

In For Keeps, the third book in the series, life takes an awful turn. When Rachel is murdered by a serial killer, it puts Sam back in the psych ward, the same place he was thrown when his little brother disappeared without a trace fifty years earlier. Desperate to fix things, he calls on the power of the green marble, the talisman his little brother Billy controls from afar that whisks him back and forth through his past.

Unlike those of us in real life, Sam gets a “do over.” He flies back in time to desperately try to fix the problems that lead to this gruesome act, and over and over again, he attempts to tweak the past to bring his dear Rachel back to life.

How do you write such a scene without losing it? How do you make it feel authentic to your readers? How much is too much? And how can you be certain that your character’s reaction will ring true?

It’s not easy. Matter of fact, since I loosely base Rachel on my own wife, and since Sam and I are really quite alike, it was close to torture.

I called upon my darkest, most powerful emotions experienced when my father died and also when my own dear wife almost died several times in the past few years. I’ll never forget the time the nurse in the ER called the nun on duty to bring me to a little room where no one would see my reaction to her impending news that Dale might not make it. She carried a box of Kleenex under one arm and a bible in the other. She was so sweet. Yet it was one of the scariest moments of my life. Thankfully, my wife pulled through and is doing okay today.

That hollow-gut, black-sludge-in-your-heart feeling is horrible when you lose someone dear to you, isn’t it? It’s all encompassing. Sometimes you just want to deny that awful truth, and pull away—far away—like Sam does in the following excerpt. I tried to channel those feelings when getting inside Sam’s head. Let me know if you think it worked.

Here’s the setup. Sam just picked up his son, Andy, from the airport and they enter the house after arriving home. Andy’s just arrived from his second tour of duty in Iraq, and this is his long-awaited homecoming. Rachel’s been cooking all morning to welcome her boy home. All day, Sam has ignored the insistence of the green marble, which has been pulsing, glowing, and searing his leg all day from his pocket; little brother Billy—who communicates from beyond through this talisman—was trying to “warn” him that something was terribly wrong.

For Keeps is book #3 in Moore Mysteries, and is now available through Twilight Times Books and Amazon.com. The series can be read in any order.

Sam raced toward the laundry room in a panic. Rachel’s wheelchair sat abandoned in the hall, and his son froze in the doorway, hands clenching and unclenching at his side.

Andy’s voice thickened. “Maybe you shouldn’t come in here.” He spun and tried to hold Sam back.

One of Rachel’s shoes lay beside the doorjamb. The brown clogs. Slip on. With lambswool lining. She loved them so much she wore them even in summer.

Sam drifted closer, terror pooling in his stomach. As if in anaphylactic shock, his throat tightened and threatened to close off his air. His heart beat wildly now, in his throat, ears, chest.

Sam barreled past his son and stumbled into the room, his voice hoarse. “What happened?”
Rachel lay on a basket of laundry, her eyes wide open, looking with blank surprise at the ceiling. Sam’s garden shears protruded from her heart. The image danced before him like heat waves on tar, shimmering with unreality. Blood ran from Rachel’s floral print blouse to the sheets stained red in the basket, pooling on the white linoleum floor.

The room tilted. A series of screams of No No No No No resonated in his head. Or maybe he yelled it aloud. He couldn’t tell as he shoved Andy aside and collapsed beside her, checking for the pulse that evaded him like a cruel tormentor. Neck. Wrist. Ankles. No beating met his probing fingers.

“NO!” He drew the shears from her chest, sickened by the soft sucking sound it made, then wadded up a compress of pillowcases and held it over the wound to stem the flow. More blood dribbled from the wound and curled around her pearl buttons. He realized with a start that she was still warm.

He looked wildly about the room, as if a solution lay beneath the neatly folded piles of towels and linen. “Call 911. Hurry!” He cradled Rachel in his arms, smearing the blood between them, and feeling her arms dangle away from him, as if she didn’t have the strength to return his embrace.

Andy cried out, his anguish pinging across the small room. He squeezed between his mother’s body and the washing machine, holding his hand out to his father. “Dad. It’s too late. She has no pulse. I checked, too.”

“NO!” Sam’s mind reeled, his vision clouded, and the scent of blood tasted metallic on his tongue. “Who did this? Is he still here? She’s still warm, Andy. Find the bastard!” He stiffened when his brain repeated a phrase he’d heard during some of Rachel’s favorite shows.

Panic slewed over him, boiling inside his head, freezing his arms and legs.

My garden shears. The killer took them from the barn. Used them on my Rachel. And my prints are all over them.

A great gulping scream filled his throat, tearing out of him like a primal scream. “RACHEL!”
Her head slumped sideways when he moved away, as if she was rejecting him. He checked her pulse again, muttering under his breath. “No way. No. No.” In a sudden manic thrust, he stood and reached for the marble, searching his pockets, patting madly at his pants and shirt. “My God. Where is it? What did I do with it?” Sam asked aloud. “Billy! Why didn’t you warn me?”

Inside the double-stuffed world that batted him between reality and nightmare, he remembered the marble’s insistent throbbing all morning. Billy had tried to warn him, had tried hard.

“Dad, come on. You can’t help her now.” In spite of Andy’s two tours of duty in the heat of battle in Iraq, the bodies he had seen and possibly created, and his soldier-toughened soul, he wept. Loud and strong, he wept and choked on his words. “Dad. Please. Leave her be. It’s over.”

Andy pulled him to his feet. Sam stared at his son as if he’d never seen him before. His eyes widened, trying to piece together a puzzle. Who is this nice young man? And why does he look so familiar?

Andy took him by the elbow and started to shuffle him toward the living room.
“Come on, Dad. Let’s go sit down.”

“No. Please. My wife needs me. She has multiple sclerosis, you know.”

Andy’s eyes popped open. Tears still streamed from them, and he shook his father’s shoulders as if he could not only snap him out of it, but maybe bring back his mother, too.

Sam stopped and stared at his bloodied hands. His legs weakened to jelly. He stumbled, then braced himself against the wall as sobs wracked him in waves of increasing amplitude. He slid to the floor and buried his face in his hands.

Thanks for reading! I hope you were drawn into Sam’s world, and that you might want to see how our favorite retired family doctor gets out of this one. 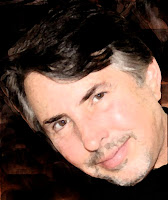 FREEBIE! The FOR KEEPS Kindle eBook will be free to all readers on Sept. 14th, 15th, and 16th 2012, as well as on October 12th and 13th. Please stop by for your free download here. Also, all of my other books in my three mystery series will be priced at $1.99 during this sale. Check them out at http://www.lazarbooks.com.

Posted by Magdalena Ball at 1:00 AM