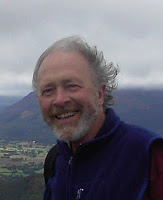 
Slant-stacked, unquarried, these slate cliffs are a wafered ice cake that has been snapped, then pushed together, refrozen and snapped again. Within stratas of slate are stratas of slate where water can penetrate. Through other stratas of black slate white and pink quartz has been dribbled and veined. On beach stumps this quartz is last to be eroded, becomes a globular warty mass, a dirty icing, nor more picturesque than fire-melted plastic.
Above the lustrous blue
of a shale-silted sea,
over path-scarred heathland,
goes the flame-flicker rotation
of three brown butterflies.
Could as easily hate this place as love it. Arrive on a wet day, gusts from every which way flicking rain into your face, walk over/through drain surge and gurgle; and it will feel relentless, this ever-blowing wind, the wet that gets into everything. All that you will see of the grey sea is it roiling white around black rocks, misshapen balls of its khaki spume flying over the gulls sitting out the storm on the putting green. A sustained blast of wind will seem to hold down any house you are in. Only, on its cessation, for the house to balloon out as if about to explode. Except that this time it doesn't. And you await the next blast.
Posted by Magdalena Ball at 10:03 PM