Compulsive Reader Newsletter for June has just gone out

Hello fellow readers and happy June.  Just letting you know that another issues of The Compulsive Reader news has gone out.  I know that the word “compulsive” occasionally triggers the spam filters so if you didn’t get you copy, just drop by the Compulsive Reader News Archive and pick one up.  This month we have ten fresh reviews including new books by Helen Razer and Bernard Keane, Brenda Bowen, Philip Glass’ memoir, Carolyn Martinez’ excellent new nonfiction book, several new interviews and a whole lot more.  We also have 3 book giveaways and of course the usual global literary news round-up.  Over at the radio show, there’s my latest interview, conducted live at the Sydney Writers Festival (in the back room of the former Sebel hotel, which was full of visiting authors that day) with non other than Ben Okri, who spoke with candour and intensity about his new book The Age of Magic (as you can see from the photo on the right, taken while we spoke, by Okri’s Australian publicist at HarperCollins). 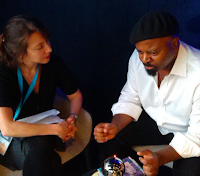 Ben also spoke about his poetry and the relationship between poetry and prose writing for him, about the value of slow reading and attention, about why it is so important to retain magic in our lives, and so on.  The interview was only 30 minutes but we crammed a lot in!  To listen, just drop by The Compulsive Reader Talks.

If you aren’t a Compulsive Reader news subscriber, you can subscribe for free at http://www.compulsivereader.com - just on the front page (upper right hand side).  I only send out one newsletter a month, it’s a great way to stay on top of what’s happening in the book world, and we give out lots of books!

Posted by Magdalena Ball at 4:36 PM