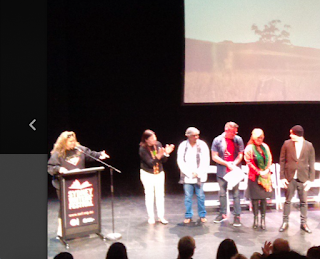 This Saturday, at the Sydney Writers Festival, I had the pleasure of listening to some ten poets (11 if you count the English “heckler” who was invited to join in) reading to the theme of Give Me Back my Mother’s Heart at Wharf Theatre 2. The performers were from across the Aboriginal nations, with the exception of the ring-in, whose British/Caribbean work was in sync with the theme but infused with the pain of diaspora, rather than displacement.  It was so polished and powerful, I knew he wasn’t really a ring-in.

Ali Cobby Eckermann, Director of Aboriginal Writers Retreat, led up the group, whose work was confronting, intense, angry, funny, powerful, and often delivered with the memorable punch of Slam.  Ali’s own opening poem, “I Tell Ya True”, which you can read in it’s entirety on Poetry International Web, presented a moving reminder not to judge others:


you never know
what sorrows we are nursing

Eckermann’s co-collaborator at Aboriginal Writers Retreat was Lionel Fogarty, who, along with Maggie Walsh, Ken Canning, Lorna Munro, Elizabeth Wymarra, and a group of poets from the Redfern Writers Group, presented a varied selection of work, full of stories of loss, love, pain, about losing mothers -- sometimes through having been stolen away during the disastrous Child Removal Policy in 1969, and about finding mother’s heart beating in ones own chest:  “all here without our mothers...”.  I found myself laughing, crying, feeling ashamed and feeling proud throughout this session in various parts, and sometimes all of those things at once.

What I liked best about the session was how tightly linked the poets were and how the poetry managed to bridge the gap between a deep timelessness and a very modern streetwise sensibility.  Though the work was inherently different: the voices, the ages, the level of experience, and even the backgrounds varied, there was such a powerful camaraderie and connection between the writers and their sense of being part of a single voice gaining collective strength through mutual support.  The audience felt it too: participating with whoops, applause, shout-outs, gasps, tears, and laughter.  It was a great session that left me feeling very excited by what I heard.  I’ll be hunting down Eckermann’s forthcoming book Inside My Mother (it’s Giramondo, who else), and books by other members of the group, as I was left wanting more. I just wish I could find the name of that British fake-heckler “ring-in”, as he was really good.
Posted by Magdalena Ball at 5:50 PM