"Spirals" references Messier 94, a spiral galaxy in the constellation Canes Venatici, and is taken from the book Repulsion Thrust.  If you'd like a personalised autograph for your Kindle copy of Repulsion Thrust (or for one you buy for a science/poetry loving pal as a pressie) just click on the link below. If you prefer a hard copy, drop me a line and I'll post out an autographed bookplate.

Poetry Monday: A Wind Has Blown the Rain Away

ee cummings' work has got to be among the most difficult to set to music.  It's strongly visual in its placement. It's complex rhythmically, and has such a strong, innate musicality that doesn't rely on the traditional rhyme but instead through sound and structure, and the confounding of traditional syntax. Nevertheless, Ellen Mandel has such a deep understanding of the work that she's managed to enhance and support it through her 15 compositions on a wind has blown the rain away. I've featured her CD the first of all my dreams in an earlier blog post, and one of the things I mentioned was that Cummings was the star of that CD.  In a wind has blown the rain away it's all Cummings. The music is so apt - mimicking the motion and themes of the work without ever detracting from it.  Todd Almond's voice is sublime too. The title song is one of my favourites. I've reprinted the entire poem, a Shakepearean sonnet, below, and you can listen to it by clicking onto Ellen's website here (just scroll down - it's the 10th song): http://www.ellenmandel.com/music.html

Impossible Ones: We educated 30 kids! Through my Pencils of Promise campaign, I raised enough money to educate 10 children.  Then I won a $500 scholarship which I donated back to the program, so now we're up to 30 children!  There are currently more than 61 million children without access to education, but Pencils of Promise is doing something about it - building schools around the world - they've built 50 already and are working on the next 50.  At $25k per school, it seems like an impossible goal, but at Impossible HQ (and ModPo!) we know nothing is impossible and we're aiming to pull together enough funds to build an entire "impossible" school in Guatamala.  I met my own modest target, but the overall campaign is only at 71%.  Joel has now raised $17,732 towards the full cost of a school and he's doing all sorts of outrageous things to earn the rest (like running ultramarathons).  It's not too late to help.  Drop by http://pencil.li/PHZ7Dj, donate whatever you can, and help make the world a more literate place.  Thank you!
Posted by Magdalena Ball at 9:28 PM 0 comments

ModPo is finished, but ongoing 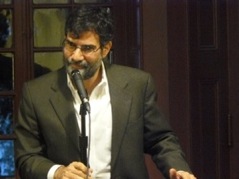 It is with some sense of sadness that I note the ending of the ten week ModPo course this week. Though it does mean I can now catch up on the rapidly growing stack of alternate reading material awaiting my attention, I'll miss the guided, well-structured close readings; the immersion into the avant garde, and above all the camaraderie of poetry enthusiasts from around the world. Our discussion forum will remain open for a year, and poetrypanicked students are busy trying to set up ongoing variations on ModPo - with mini study groups, self-run podcasts, anthologies - you name it so the fun won't end. I'm excited about being involved in some of those, but also excited about now feeling capable of tackling some of the poetry already on my bookshelf that has perplexed me in the past (and writing some of my own - a deadline is fast looming...).  One resource that we've used throughout the course is Jacket2. There's a whole year's worth of amazing work and analyses to explore on that site and I urge you to go and check it out. On the front page today is a dozen of Australia's most respected poets from the ongoing "Fifty-one contemporary poets from Australia". If you aren't sure where to begin, try the wonderful Judith Bishop ("The sky/would pool in our hands"). I'll be doing a whole feature on her pretty soon (and hopefully chatting with her in person in the near future - more on that later - don't want to spill the beans before I'm allowed to). I can't begin to praise the ModPo gang enough - and in particular, the great Al Filreis, who, throughout this amazing course, has created a perfectly wonderful syllabus, recognised and remembered everyone's name, and who has always taken the time to guide us, gracefully, to our own answers. He's the kind of teacher who makes people (and by people I mean me) want to spend a lifetime studying Literature. If you missed the first ModPo, you can register sometime soon for the next class here: https://www.coursera.org. You won't regret it.

I'm going to end this week's Poetry Monday with Tracie Morris' "Afrika". Morris herself joined us on the forums (along with many other of the poets we were studying including Christian Bök, Kenneth Goldsmith, Jackson Mac Low, Jenna Osman, Ron Silliman, Charles Bernstein, Lyn Hejinian, oh my...I half expected Emily Dickinson to put in an appearance) and responded, with enthusiasm and warmth, to nearly every post on her work (including those that were confused and uncomfortable). Her voice on this piece is quite extraordinary - shocking and familiar all at the same time. I'm not sure I would have been able to listen to it before doing ModPo. Now, this work leaves me breathless. "It all started..." http://media.sas.upenn.edu/Pennsound/authors/Morris/Morris-Tracie_It-All-Started-When_tucson_06-08.mp3

So we're now in the final week of ModPo and I have to say that I feel like every pore of my skin has been opened through these 10 weeks. Something inside me has indeed shifted and I'm looking at poetry in ways I couldn't when I began this course. Before I say something about chapter 9.3, which is focused on the most challenging topic for me of all - unoriginality, I promised that I would put up my Mesostic - the one I created for the final assignment. Here it is:

plaY, there
hamlEt
thAt
They
Should

As you can see, it's a very small tribute to WB Yeats, written through "Lapis Lazuli".  Though creating it was easy, I spent a long time finding something that would work. I was (perhaps wrongly) conscious of using something so modern that the original author might object to me using their words (yes, I know that copyright is part of the challenge of the chance and conceptualist poets, but it's a challenge I'm not ready to take on). I really wanted to chose an Australian poet, but the software was buggy and Yeats was the only one who worked, so there it is.  I think it's actually quite evocative. 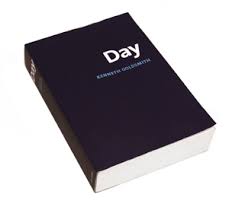 Moving right along though, this week we're leaving the Aleatoric poets and moving into the Conceptualists.  Conceptual poetry has its heart in the notion of unoriginality. The concept (hence the label) takes priority over the execution.  The first poet we're studying is Kenneth Goldsmith.  In the following little clip, taken at The White House (with Michele Obama as the listener), Goldsmith describes himself as "the most boring writer who has ever lived...", and perhaps proves it with his 900 page book Day, created from rewriting the NY Times. And yet, as Kenny G says in the clip below, there is a kind of freeing quality to this process: "The whole world is yours to write."  The burden of originality has been lifted.

Posted by Magdalena Ball at 12:48 AM 2 comments

Poetry Monday: The difference is spreading

I'm afraid I'm going to cheat just a little this week (I feel that the Chance poets would approve), and satisfy my desire to get back to Gertrude Stein.  Following is Jackson Mac Low's reading of Stein's A Carafe That Is A Blind Glass from Tender Buttons (click on the link and turn sound up). Here's the text:

A kind in glass and a cousin, a spectacle and nothing strange a single hurt color and an arrangement in a system to pointing. All this and not ordinary, not unordered in not resembling. The difference is spreading.

We did a very close, interpretative reading of this piece in ModPo during Stein week, looking closely at meaning. Here's what I wrote:  Blind glass, blind drunk, drunk because hurting (we drown our sorrows)? I have to admit, just aesthetically, that I love the phrase "a single hurt color". Aesthetics itself is something that we haven't spoken about much here, but I don't think we can discount it, even when knee deep in experimentalism, because the innate beauty is also part of the poem's power - it's ability to stir (or hurt, perhaps) us. The notion of a hurt color is something that has visceral power. We can feel the power of those words physically. The colour hurts and is hurt. It hurts us with its intensity. It is hurt by being constrained into an 'arrangement in a system'. The carafe is blinded by opacity. Blindness hurts - like eyes closed tightly. It seems to me that this poem is very compact indeed, but it can be expanded and unpicked into so many connections, both within the poem itself and outside of the poem.

In Mac Low's reading, we move away from the semantic sense of the poem and focus more on the sound: the musicality of it - the intonation, the sibilance, rather than the meaning of it. Form, in this reading, comes before the content, and the meaning is inherent, rather than teased out (as I attempted to do above) and explicit, in the music of the piece rather than the specific translation of the words into a narrative. Mac Low goes further with this musicality and creates eight strophes based upon the entire text of Tender Buttons using the poems as his source and seed text, and putting them through a computer program called DIASTEX which produces an entirely new computer generated poem. The result can be see here: http://www.poets.org/viewmedia.php/prmMID/15566

The finished product is kind of beautiful ("That section has a resemblance to light"), though it's impossible to tease out a totality of meaning - you have to let go and let the music of it take you somewhere.  This is challenging to a semantically oriented reader like me (maybe you too), but it's also rich and freeing in its way.  John Cage plays with a simpler form of chance operations called Mesostics, which uses a word (name, part of a poem, anything...Cage tends to use names) as its middle spine and picks a pre-published text to work through the spine - Allen Ginsberg's "Howl" being a famous example ("Writing through Howl").  Cage has all sorts of complex rules for ensuring that his selections are are chancy as possible, but it's very easy to do with a computer program.  Would you like to give it a try?  You can, here: http://www.euph0r1a.net/mesostomatic/ This is actually our assignment for this week and my challenge I think (as programmer rather than poet) is to choose my source and seed texts carefully - that's all I can do to engage with contingency.  The rest is up to chance. I'll post up the results for fun when it's done.
Posted by Magdalena Ball at 1:09 PM 2 comments